Time to let out the rage! My enthusiasm for this topic is such that I’ve made it one point per book, so I can get 12 characters in. I’m sneaky like that. I have tried to put the list in order going from least frustrating to most frustrating, but it was quite difficult, and it’s not perfect. 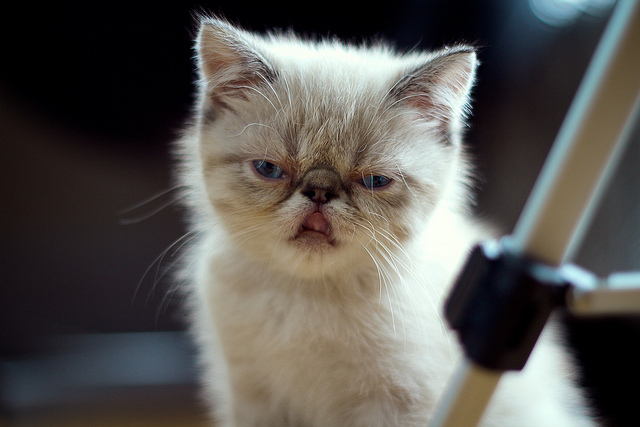 This cat represents how I feel about Bella Swan. Yeah, I went to the Flickr Creative Commons page and searched for ‘angry cat’. What of it. Photo by Captain Pancakes, who also has a blog.

Top Ten Most Frustrating Characters Ever

1. Kim Yamamoto from The Boyfriend List, by E. Lockhart – Why would you start dating your best friend’s ex-boyfriend days after they broke up and decide she has to be okay with it because he’s your “soulmate”? Facepalms all round…

2. Dylan Kowalski from the Diary of a Crush trilogy, by Sarra Manning – This one is a good kind of frustrating. If Dylan wasn’t frustrating, there would be no plot. But my god, is that boy frustrating‽ He only gets more frustrating in each book. I love it.

3. Mr Sheridan from Nobody’s Family Is Going To Change, by Louise Fitzhugh – Some more necessary frustration. The point of the whole book is that he stubbornly refuses to consider what would actually make his children happy.

4. Mr Bennet from Pride and Prejudice, by Jane Austen – Most people seem to think that Mr Bennet should be in the ‘Top Ten Best Dads in Literature’ list, but they are wrong. He belongs on this list! His wife and all his daughters will become homeless when he dies unless at least some of them get married, and does he give the tiniest shit about it? Does he do anything to try to prevent this? I’m not saying he should be obsessed about it like his wife, but some concern would be, well, parental…

5. Meghan Chase from The Iron Fey, by Julie Kagawa – Oh, Meghan. Why do you keep running into dangerous situations without asking for more information about them?

6. Dolores Umbridge and Ron Weasley from the Harry Potter series, by J. K. Rowling – Musical interlude! This Harry and the Potters song says it all re: Umbridge. Though Imelda Staunton does not look like a frog.

Now, Ron, why are you so jealous that Harry has to risk his life over and over? And why do you keep pretending that you’re not madly in love with Hermione? Oh well, he does grow and change and I love him.

7. Stephen from We Had It So Good, by Linda Grant – He just goes along with life and never seems to actually make a decision or take action for himself.

8. Sephy and Jude from Noughts & Crosses, by Malorie Blackman – I really only mean child-Sephy, because she doesn’t have the imagination to understand why Callum and the other Noughts find some things she says offensive. I like her once she grows up, whereas Jude turns out to be horrible. He doesn’t seem to care about anything at all, not even the cause he’s supposedly fighting for. I think he just enjoys it all.

9. Bella Swan from Twilight, by Stephenie Meyer – So you start at a new school, and almost everyone is nice and welcoming. Are you a) nice back or do you b) not give a crap, only being interested in the pale people who sit together in a boring little clique? Think about it for approximately two seconds and you’ll agree, Bella is a dickhead. And don’t get me started on how she suddenly becomes really clumsy in chapter six, or whatever it is. Based on the film and reviews, I think she only gets more frustrating in New Moon, but I won’t be reading it, because she was barely sufferable in Twilight.

10. Amy March from Little Women, by Louisa M. Alcott – She burnt Jo’s manuscript. If someone burnt my only copy of the novel that I had been working on for years, they would be dead to me. Of course she does actually almost die, which leads Jo to forgive her, but that just goes to show how wonderful Jo is. Amy’s still a bumface.