This week’s Top Ten Tuesday is a pick-your-own-topic: ‘Books for Readers Who Like ______’. I wasn’t planning to take part, but then Ming suggested that ‘Books for Readers Who Like Teenagers Effing Up The Patriarchy’ as an idea. I loved it, and told her so, and after a little bit of discussion we agreed to make this a collab. I’m going to list five books below, and once you’ve read this post you can pop on over to Rare Medium Well Done for the rest of the list.

So without any further ado: 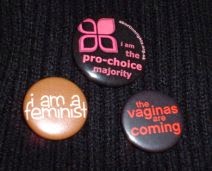 My feminist badge collection from my teenage years
1. The Gemma Doyle Trilogy, by Libba Bray – Victorian girls with powers not only have to save the world, but also have to work out how to improve their own lives, which is possibly more difficult, living in the era that they do and being supposed to go straight from finishing school to marriage/drudgery.
2. Kiki Strike: Inside the Shadow City, by Kirsten Miller – a gang of delinquent Girl Scouts, led by the mysterious mastermind Kiki Strike, explore a hidden city below New York. At the end of every chapter there are useful lists, such as ‘How To Take Advantage of Being a Girl’ and ‘How To Kick Some Butt’.

3. The Disreputable History of Frankie Landau-Banks, by E. Lockhart – Frankie finds out that her boyfriend is in a secret all-male society at their school. He won’t even admit that it exists. Bored by this lying and shameless sexism, she decides to infiltrate it. Fun ensues.

4. The Forestwife Trilogy, by Theresa Tomlinson – Medieval teenager Mary de Holt doesn’t fancy getting married off to some old guy, so she runs off into the forest with her wet nurse Agnes, where they help heal the sick and rescue people from the patriarchy. Along the way she changes her name to Marian, learns archery, and spends a bit of romantic time with a dude called Robert who wears a hood. Also there are AWESOME NUNS.

5. Valiant, by Holly Black – this is more incidental patriarchy-effing but Val a) learns how to fight with a really cool sword and b) has to use these skills to save her love interest. Goodbye stereotypical fairy tale!

Now, please leave a comment and recommend me some of your own favourite books about teenagers who, when confronted with tedious stereotypes and boringly gender-conventional lives, refuse to put up with it. Or people in general!

Previous Post: « Finish It Feb 2015
Next Post: An Interview with Kathryn James, author of Gypsy Girl (Countdown to 7th May) »