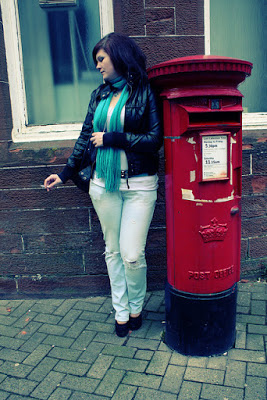 If I remember rightly, I got my copy of French Leave: Maxine Harrison Moves Out! in a sale at New Cross Library for about 5p. When it comes to library sales, I will pretty much buy anything teen/YA, fantasy, sci-fi, or combinations of the above. At the time I didn’t realise it was the second in a pair, so I had to track down French Letters: The Life and Loves of Miss Maxine Harrison before I could get on with the reading, but once I did I fell deeply in epicly entertaining love.

Both books take the form of letters written by Miss Maxine Harrison, mostly of Hornsey, London N8, to her best friend Jean Olgethorpe, who has gone to live Up North with her family.

In French Letters the plot revolves around Maxine’s lack of money and her attempts to impress her other penpal, also called Jean, but male and French. She tells him about her glamorous life as the daughter of the Head of London Transport, but then he decides he wants to visit, and she has to somehow cover up the fact that her Dad’s actually a bus conductor and that she sent him a photo of girl-Jean instead of herself. She also has to deal with fashion, snobby girls at school, and her parents’ political arguments.

By French Leave, things have taken a turn for the serious and Maxine has decided to leave her parents’ home because they can’t afford to let her carry on at school after her GCSEs. Her dad has lost his job and started reading The Sun, her boyfriend seems to be more interested in his motorbike than her, and her sister is getting married and excited over a potato masher. Meanwhile Jean starts going out with the ‘local Tory’ in a town ‘where even the police vote Labour’ and is surprisingly reluctant to commit to moving into Maxine’s bedsit.

If I give you any more detail I will spoil the plot and okay, only a tiny fraction of the jokes which are piled onto every page, but you’ll appreciate these books best if you just buy them and read them! I am normally someone who doesn’t even find books with seven quotes on the cover declaring them ‘laugh out loud funny’ amusing. But when reading these I just kept laughing, and laughing, and laughing. The most incredible thing about these books is that they are consistently funny from start to finish. I really enjoyed Diary of a Chav: Trainers V. Tiaras but I’ll admit that the first few chapters are the most humourous, and that the plot and the sympathy I felt for Shiraz is what kept me reading. The laugh-out-loud funniness just isn’t sustained throughout the book. In French Letters and French Leave, it is. These books are not just pure comedy, however, as they feature serious issues – finance, politics, sex, employment, exams, education, abuse – along with the laughs.

French Letters and French Leave are a little bit dated, teenagers today will probably find it slightly weird that the girls write to each other using snail mail and rarely phone, and that there aren’t any mentions of all the 21st Century mod cons. They’re not full of 1980s cultural references or mentions of old technology, but historical/political context is fairly important to the story, so older teens and adults will probably find them more accessible than younger teens. This also means that readers in other countries than the UK might want to check Wikipedia a few times whilst reading. You won’t struggle to follow the story by any means, but you might miss out on some of the humour and just not get some of the references unless you know or learn about the cultural context.

These books are published by the Women’s Press under the Livewire imprint, I’m not sure whether they are still in print. I really think they need reissuing with new covers in any case, the covers they have at the moment are definitely dated and will probably put some would-be readers off!

If you’re looking for truly hilarious fiction, you’ve found it. I also recommend these books to anyone who is studying or interested in ‘teen/YA through the ages’, as they are some of Livewire’s bestsellers.