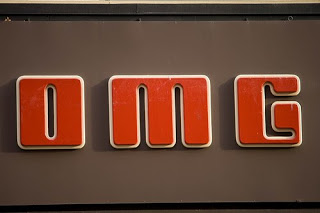 Photo by Jonas B. I find this strangely hilarious.

I just finished reading Della Says: OMG! and I’d planned to start reading something else afterwards, as I’ve got a weird stomach ache, but I had too much energy to keep lying down, so I decided to review it straight away – something I rarely do! I just enjoyed it too much to keep my enthusiasm to myself. Does anyone else get really energised after finishing a good book?

The story is told by Della, who is 15 and pretty mature for her age, but living under the shadow of her parents and sister, who get more positive attention for the way they look than she does. Her elder sister Jamie is especially popular, and has a house party before she goes away to the USA for the summer. At this party, Jamie’s boyfriend attempts to make the moves on Della, but she is rescued from his unpleasant attentions by Dan Bailey, a boy who Della has daydreamed about since they met in primary school. She writes about him regularly in her diary and has gotten so used to the idea that he will never like her that it’s a complete surprise when not only does he ask her out, but they end up kissing. It’s all blissful until the next day, when Della discovers that her diary has gone missing. She searches everywhere for it, but learns that it is stolen when she gets a Facebook message featuring a photo of one of the most embarrassing pages.

It felt like a bit of a mad rush reading this, it’s really well plotted and things just keep on happening. I didn’t read it in ‘a single bite’ as Meg Cabot suggested in the front cover quote, but I started reading it yesterday and finished it today. I had planned to read it this afternoon after I got some work done but when I woke up I found myself reaching for it. You know it’s a good book when all my self-discipline just melts away. I really liked the main characters, I even felt sympathetic towards the ones that made ethically dubious decisions and I thought it was really refreshing to read a book that was so non-judgemental in its narrative tone. I was pleased that although e-mails, Facebook, and text messaging all featured in the story it didn’t overly rely on them, because that can get gimmicky. Most of the action actually takes place ‘in real life’.

I was constantly trying to guess who had stolen Della’s diary – I think I suspected all of the characters at some point! It was easy to feel sympathy for Della and I liked that her friends were supportive, as this type of story could easily become a cringefest in which all the other characters laugh at the protagonist. I thought most of the characters were interesting, Gemima was a bit of a standard mean girl but I liked Dan’s dorky side and that Della’s parents have a chain of delis.

No book is perfect but I could only find three real flaws in this one: 1) I wished there were more excerpts from the diary, those that appeared were great but I wondered why the person who had it was so subtle and didn’t maximize the embarrassment factor 2) I couldn’t work out where it was set, but I know very little about the UK outside London so that may be just a failing on my part 3) the print was quite big and sans serif, it was awkward to read with my contact lenses on. Even the blurb for Della Says: OMG! was pretty good, short and sweet, and I think blurbs are usually rubbish!

Keris was the only author at the Chicklish birthday event whose work I hadn’t read, so that made this a must-read in the interests of fairness. I tried to get hold of it before the event, but my local library don’t have it in stock, severe error of judgement there I feel. It was quite a quick read, you could manage it in an evening if you’re a fast reader, and it’s ideal if you have one block of time as it’s so hard to put down!