Check out my free ecourse Ignite Your Passion for Reading: Fall in Love With Books!
You are here: Home / Archives for Book Chat 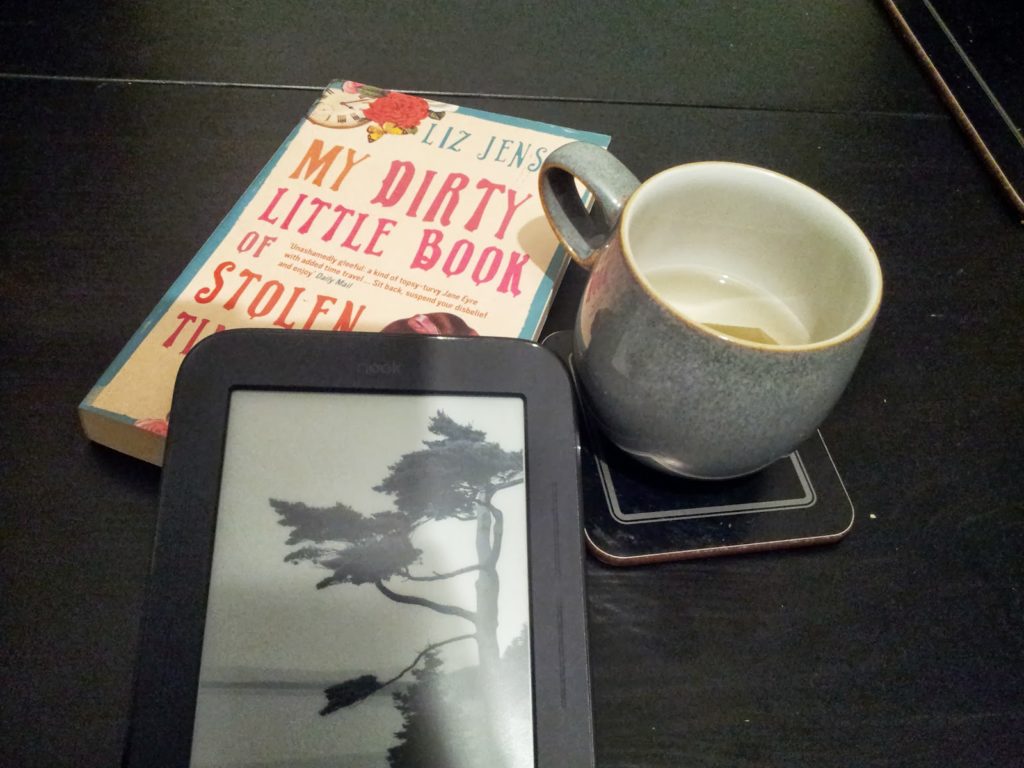 I’ve been a slow reader for the last couple of years. If I remember rightly, in 2009, the year I finished my MA, I read 91 books. That’s my all-time record. I’ve hit 50 a few times, but that year I read books like it was my job, because it was my job.

My MA is in Creative and Life Writing, and for me, reading and writing are co-dependent. I’ve never been one of those writers who has to put reading on hold when they’re working on a project. Reading helps me to write. There are other things that help me write quickly – green tea, walks, anger, the sudden resurfacing of ordinarily-buried memories. But I have to keep reading too. I can’t go too long without it. I have to fill myself up with words to compensate for those I’m putting out. Writing requires reading, and reading induces writing.

Only, there’s this thing called blogging…Oh, blogging! How I love you! It’s kind of like creative writing, except with almost-instant gratification thanks to comments and retweets. It’s very easy to get carried away with it. To find yourself making schedules and other plans and ignoring the little voice that says ‘Can we PLEASE work on the novel now?’.

So I get up in the morning and do my morning pages and look at my blog schedule and go ‘Oh yes, I must write that before Friday’ and I draft whatever it is and then I go to work. I come home and finish it and post it and then I’m too tired to do anything else so I play Flash games on the internet until it’s time to go to bed. Or if I don’t have work, I fit in some procrastination and some more Flash games instead.

After deleting a load of old feeds from my RSS reader a few weeks ago I reached Peak Internet. This doesn’t happen very often, but it’s a powerful state to be in. Basically, I’m bored of the internet. I can hardly bear the sight of it anymore. I don’t want to surf Wikipedia or read depressing articles on The Guardian or play Flash games for longer than ten minutes at a time. This has freed up my mind to do some problem-solving.

I need to read so I can write. I prefer not to read under the light of my yellow lightbulb, which is right above my bed so I can’t lie on my back to read without it blinding me. Therefore, I’ve started reading in the afternoons, after I’ve done some writing.

IT’S AMAZING. I still manage to blog, but now I’m forced to be more organised, and to procrastinate less. Excellent.

When do you prefer to read? Mornings? Evenings? Afternoons? Do you get most of your reading done during your journey to work, or do you read more at home in the evenings? I read a lot more during the week than at weekends, when I have more social activities competing for my attention. How about you?

It’s the final day of Diary of a Crush week. The books are out in shiny new print editions today, and you can also get the trilogy plus the Diary of a Grace novella in e-book form, should you prefer. Yay!

Today I shall be mostly talking about myself, and using the word ‘cool’ a ridiculous number of times. I hope you enjoy it!

Warning: this post contains massive spoilers for the Diary of a Crush trilogy. I read the ending before the beginning, you don’t have to. Stop right now and go read the books, if you want to and haven’t already! 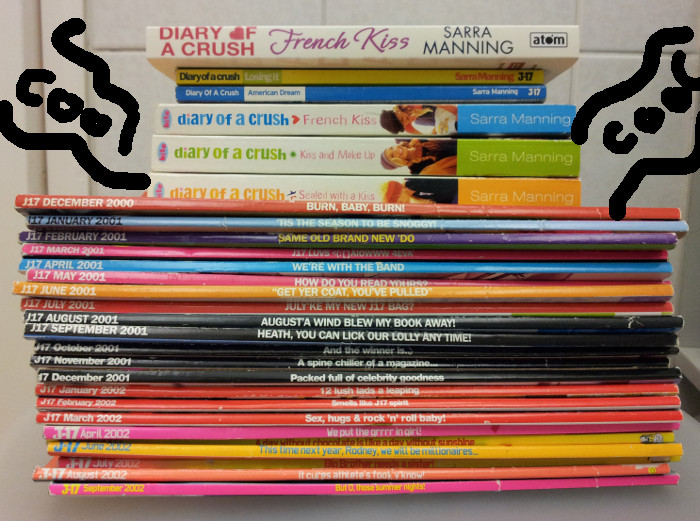 Diary of a Crush and my J-17 mags, radiating cool. A beautiful image I’m sure you’ll agree.

I’ve always been a magazine fiend. I’ve still got my hoards of Girl Talk and Art Attack from childhood, though I’ll be sorting through them soon. Last year I threw out several editions of Safeway (yes, the freebie from the supermarket that got taken over by Morrisons), and tore out the pages that I wanted to keep from countless other store magazines – though it took me until this year to tackle my piles of Spirit, the Superdrug magazine, because I could hardly bear to dismantle all those beautiful make-up photos. In my teens I read Mizz, and then Sugar, and then Sugar and J-17, and then finally just J-17.

To explain my love, we must rewind to Guide camp in the early Noughties. One of the girls in my tent had a copy of J-17 that we flicked through, and it seemed so much cooler than any other magazine I’d read. It seemed to be aimed at a slightly older audience than Sugar, but without being completely boy-obsessed like Bliss, which I never could stand. The photoshoots were edgier and the articles meatier and I wanted it.
One essential fact about my teenage self: I desperately wanted to be cool. I was lanky and bony, with glasses and flat hair, and one proper friend. All I wanted to do all day was read books, write stories, sing along to music, and occasionally play my keyboard. I liked Guide camp because I didn’t go to school with anyone there, so nobody knew that they had to ignore me if they wanted to be cool, and most of them would happily chat to me and even invite me to games.

To be honest, I wasn’t even sure what cool was. I caught a whiff of it every now and then, when an interesting song was played on the radio, or a woman walked past with a quirkier outfit than I usually got to see. I muddled my way through popular culture, listening to whatever everybody else was playing, and wearing pedal pushers and karma beads that year everybody else did. But J-17 was cool. I just knew it.

A month or two or three later, after I’d finally plucked up the courage to buy a magazine that I was sure was for girls that were much cooler than me (ie. any degree of cool at all), I was delighted. I’ve also always loved make-up. And there, in the first copy of J-17 that I bought, was an article about how to do punk-style make-up, with actual intructions and impressive photos. Other magazines’ beauty editorials were vague and uninspiring compared with this riot of colour. There was also an article about kissing, and reviews of music by bands that I had never heard of, and fashion pages that were actually interesting, and it was all so incredibly cool.

Finally, on the back page, I read the Diary of a Crush column for the first time. It didn’t make much sense, being one entry in an ongoing series, but as the months passed I fell in love, because Edie Wheeler was the coolest of all cool girls. Let’s summon my teenage self from the depths of my mind and look at the evidence:

1. She was 18. I was only 13, which meant that Edie was basically the same as God to me.
2. She was named after Edie Sedgwick and Tim Wheeler, of Ash fame
3. She was a WAITRESS (seriously, height of cool)
4. She was in a band (NO WAIT THIS IS THE HEIGHT OF COOL)
5. She was dating an artboy (I only discovered what an artboy was because of J-17, and thank God, I mean Edie, for that)
6. Who was two years older than her! (*swoons from all the cool*)
7. And she didn’t live with her parents, in my first issue she’d just moved out! (WARNING: COOL OVERLOAD)

Sadly, after 22 months of excitingly looking forward to J-17 release day each month, the Diary of a Crush column was cancelled without prior warning and J-17 got a new look and editorial direction and started featuring articles about Gareth Gates, so I stopped buying it.

Eventually, I realised that all those things I thought were ‘cool’ are just things that I really liked, and that’s what I missed, still miss, about J-17. The catalogue of discoveries. Finding new things to like each month. Even with the internet, I miss having a reliable guide, and I think that J-17 would have been even better if the internet had been around. I was terrified of record shops, obviously, because they’re full of cool people. If I’d been able to Google the bands on their lists of new artists to check out, I might have managed to actually listen to some of them!

But back to the world’s coolest girl. Edie. I only started reading J-17 at the tail end of her story, so you can only dream of imagining how thrilled I was when two years later, I was wandering in Waterstone’s, and spotted the books on a shelf. I bought them immediately and took them home, where I fell upon my bed and read and read and read, blissfully happy to find out how it all happened at last.

It was comforting to discover that Edie wasn’t always as cool as she ended up becoming. At the start of the story, she was 16, which by 2004 was slightly younger than me (and not so cool), and in her first year of college. I was in sixth form myself at the time, and was making new friends, so I could relate to the excitement and anxiety of meeting new people. Edie wasn’t a waitress or in a band, she lived with her parents, and of course the artboy was just a crush. She still wore cool clothes and attracted cool friends, but her beginners-cool seemed a lot more attainable.

So I could be cool too, if I was brave enough. It took a few more years, but eventually I started actually speaking to people, going to events that I thought sounded interesting, and buying clothes that I actively enjoyed wearing and then putting them on regularly, even just to go to uni or the shops. I’m not sure if anyone would consider me cool, but I’m happy, and have been for several years now. I hope that would impress my teenage self, but honestly? She’d probably be more impressed with the fact that I own copies of all the Diary of a Crush columns in book form, to refer to for knowledge of ‘cool’ at any time.

Comments will be much appreciated. I can’t have been the only one that was in love with the idea of being cool…

Previously: I reviewed the final book in the trilogy, Sealed with a Kiss.