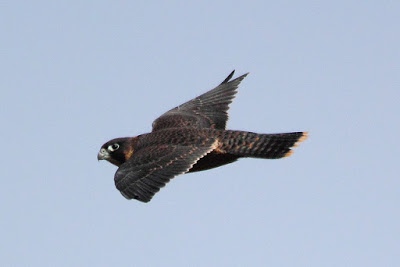 Photo by Frankzed.
Most of the falcons in the photos I found in my FlickrCreative Commons search looked quite scary but this one looks cute and happy, which made me laugh!

I haven’t read any other books from the recent crop of YA dystopias, so I started Under The Never Sky without any preconcieved ideas in my head. I expected that there would be a romance and it would be quite a prominent part of the story, but other than that I wasn’t sure of what I would find.

The plot takes the form of a quest – Aria is searching for the truth about her mother, and Perry is searching for a way to get his nephew back. At first they form an uneasy alliance, but eventually the perils they face and the discoveries they make about each other and their worlds bring them closer together and trust starts to develop.

Aria and Perry both come across as being practical and sensible people foremost, which is appropriate for the world they have to survive in, and makes them good role models! Aria was a little naive at first and Perry seemed really arrogant, but after a while these traits, which I would have found annoying eventually, broke down and they developed into more well-rounded characters.

I especially liked the romance. I don’t think that talking about this is really a spoiler, as the cover makes it pretty clear that there will be a romance, but if you want to avoid knowing any of the details, skip the next paragraph. [As an aside, although the cover is pretty, I think I would have preferred one that didn’t imply the romance quite so heavily and that promoted the sci-fi elements a bit more. But I expect that making it romantic attracted quite a few readers!]

There is no instalove, instead there’s instarevulsion, but that peters out after a while, and that’s when their friendship develops and turns to lust. The book finishes without the ‘l’ word being said, which I found quite refreshing and realistic. Although Aria and Perry do get quite attached to each other, they are realistic about their futures. Under the Never Sky has an open ended romance – almost anything could happen next in terms of Aria and Perry’s relationship and I’d be happy with the realism. I’m not absolutely clamouring for them to end up together, but I wouldn’t find it unrealistic either.

I also really liked Marron’s character and his little enclave broke up the dictotomy of dome-dwellers vs outsider, and introduced even more sci-fi elements to the story. I also liked the action scenes and the set-up for the next book in the series, and will be looking forward to reading it!

Few books are perfect, however, and there were a couple of things that bothered me although I enjoyed it overall. Firstly, the ‘aether’. Why was it never explained? There’s enough description of what it looks like, what it sounds like, and what it does, so I’m pretty sure it wouldn’t have been too much of an infodump to quickly explain what it is, or what the characters think it is. The absence of explanation makes it seem like the author hadn’t decided exactly what it was.

Secondly, the Outsider characters’ abilities are awfully convenient. I know that they live in a tough world and their abilities serve to even up the odds a bit, but sometimes things are a bit too easy, and the way they’ve been assigned to each character gave me suspicions about which way the story will go eventually. I really hope that what I suspected doesn’t happen as it would be so cheesy and such a typical sci-fi/fantasy trope! Under the Never Sky was pretty devoid of cheese though, so I hold out hope that the rest of the series will continue on the same path!

I’m happy to say that I really enjoyed Under the Never Sky and I’m looking forward to the sequel. If my description appeals to you, I’d definitely give it a go!

Final note, Re: genre: after I read Under the Never Sky, I wasn’t sure that I would categorise it as a dystopia. If most of the
action took place inside Reverie, then yes, but it doesn’t, and the outside world isn’t an organised, tightly-controlled society. However, maybe ‘dystopia’ works as shorthand – it does seem quite wordy to describe it as ‘post-apocalyptic soft SF with some elements of dystopia, though it doesn’t get bogged down in all the rules and restrictions’. What do you think makes a story a dystopia?