Check out my free ecourse Ignite Your Passion for Reading: Fall in Love With Books!
You are here: Home / Archives for slice of life

6ft 3in 16-year-old Medve lives in a decrepit old hotel on an island in Devon, with her father and her younger sister and brother. Her mother and two elder siblings are elsewhere in the world, and Medve appears to be quite happily running things back at home, as much as they can be run with minimum effort, until a red-haired South African stranger, going by the name of La Roux, appears to disrupt things and drive Medve to frustration and humiliation.

Five Miles from Outer Hope is a weird book. I quite often really like weird books, but ultimately there was too much that seemed to be missing from this one for me to rate it as anything above ‘okay’. I enjoyed it for the most part, I didn’t get bored, but I found it unsatisfying in the end, even a little bit irritating.

It’s literary fiction, and the blurb is completely ridiculous. ‘An instant classic of teenage self-discovery’ it says, of a book I’d never heard of before and only read because I happened to pick it up in a shop! So when I turned the first page I was anticipating a certain level of pretentiousness, but happily, it’s not all that pretentious. It is quite funny, in places, although some of the humour is of the gross out, vulgar variety, and I didn’t really laugh more than once at the quirks of the different family members.

Unusually for literary fiction, I found the teenage voice to be really strong. Medve’s character comes across really well in her narration. But there were far too many italics. Italics, in my opinion, should be used for occasional emphasis, but in Five Miles they were used so frequently they became pointless very quickly. Maybe the author was trying to make it look like Medve herself, thinking it was a cool thing to do or something, had written it down like that, but I just found it annoying. Otherwise I liked the style of the writing, it was well balanced between description, interior monologue, and dialogue, and there were some really great descriptive sentences.

I know why Medve was chosen to narrate the story – it’s about her growing up and possibly falling in love – but to be honest, I found her to be the least interesting of the bunch. She’s vindictive, has issues with her older sister Poodle/Christabel, and wants to be the queen bee in the family, as much as she refuses to admit it to the reader. Yet I was more intrigued by the almost-intellectual, devious, Patch, who Medve initially writes off as being needy. La Roux had a whole history that was continuously hinted at, sometimes briefly delved into, but never fully explored. I also wanted Big, Medve’s father, to have a bigger part in the story. I didn’t feel like I got enough of an idea of what he was actually like as a parent most of the time.

I was about to accept that this book was an overgrown snapshot-style short story (the kind I generally don’t get on with), until I got to the italic section in the last few pages, which jumps into the future like an epilogue. It places the rest of the novel into the context of Medve’s whole life, and raises more questions than it answers. This part just made the whole thing seem ever more odd and unsatisfying as a novel. A lot that I would have quite liked to read in more detail was just skipped over.

I don’t think I’ll be rushing out to try another book by this author, but other readers might really like it. If you do like what I call snapshot short stories, those that focus on tiny segments of  characters’ lives, then you might enjoy Five Miles From Outer Hope, especially as you do get to find out what happens afterwards in this one. It is a short novel with less than 200 pages, so if you’re a fast reader you won’t be risking much time. 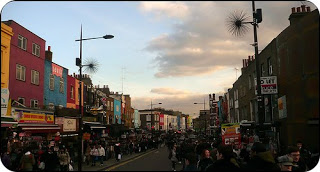 ‘Indie-emo hybrid’ Charlie has decided that he and his best friend, wannabe-footballer’s wife-type Brie – who thinks Charlie should be her boyfriend and doesn’t believe that he’s gay – will be spending their summer avoiding boredom and trying to get the best roles in the play their drama workshop in Camden will be putting on. Daisy is a lesbian, serious about acting, and learning to express herself through art. Infamous heartbreaker Walker wants to be a film director and wants to find out what it’s like to be an actor.

But Walker, having gotten on the bad side of Lavinia, is picked as the male lead. Brie is the female lead, and is terrified. She doesn’t understand the play – but she does have an amazing memory. Daisy was hoping to get the lead but instead she has to play a character she hates, and spend time with Walker and Brie, both of whom she cannot stand. Charlie falls for Walker, but Walker likes Daisy, and it’s not so much a love triangle as a huge great mess…

This book was a fun read, I did enjoy reading it, but I’m afraid that I didn’t like it as much as the other books that I have read by Sarra Manning. It is told in alternating chapters by all of the four main characters – e.g. the first chapter has Charlie as the narrator, the second Daisy, and so on. I thought the characterisation suffered from this – I never really got to know any of the characters deeply, I felt I was learning only superficial things about them – especially in the cases of Charlie and Daisy. The story didn’t have so much emotional impact, and I was disappointed as Sarra Manning’s other novels have always hooked me emotionally. It also lacked a real twist, I could tell how things were going to work out quite a long way before the end. I don’t normally mind this but I was hoping for one with this book for some reason! The characters are appealing and there are a few laughs, so I think it would make a good holiday/beach/plane journey read for anyone all the same.