Check out my free ecourse Ignite Your Passion for Reading: Fall in Love With Books!
You are here: Home / Archives for Latitude

If you’ve noticed things being a bit quiet around here, it’s a) because I was settling into my new job and b) because I was getting ready for Latitude! I’d been looking at the lineups for years, pretty much since the festival first started, but none of my friends were interested. When my boyfriend suggested we go this year I was thrilled, and after we bought the tickets I spent the next couple of months looking forward to it with a mixture of excitement and nervousness. 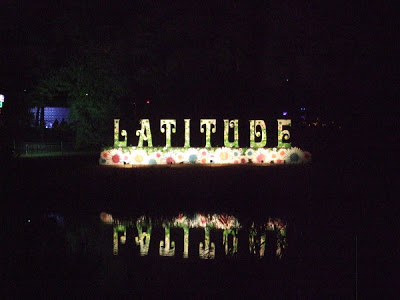 Latitude was the first properly organised weekend festival that I’ve been to. The last time I went to a festival was in 2008, the doomed ZOO8, a festival so badly run that they paid Mark Ronson with a wheelbarrow of cash from the bar, and all the security and most of the attendees had walked off by the end of Sunday. I went to Wireless for one day in 2007 but that hardly counts as it’s in London and there’s no camping!

Anyway, I was pretty impressed by Latitude. There was plenty of room for camping, easy to find toilets, drinking water taps and sinks to do washing up in, just like at a permanent campsite. At no point did the toilet paper run out. The hand sanitiser dispensers were empty a couple of times, but were refilled by the next time I wanted to use them.

The programme for the weekend’s events costs £10, pretty standard for a festival programme, but where other festivals just give you a sheet of A4 folded up inside a plastic wallet, Latitude gives you a book. 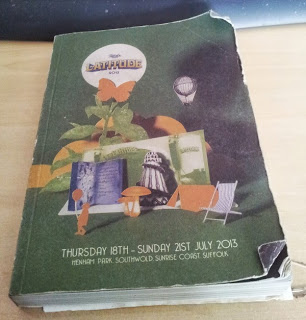 As well as maps and important info about the site and health and safety, and a chart for each day so that you can easily see what’s on where and when, there is an almost (allowing for last-minute changes) full list of acts, complete with descriptions. This is fantastic because even though there were a few acts that we knew we wanted to see before we got there, we had plenty of time left over to fill. Every morning, before the arena opened, we had a read through that day’s listings in the programme and decided what we wanted to see.

Just before the coach driver pulled out of the parking space on the Embankment, he said ‘There’s not much traffic, so we should be there in about two and a half hours’  and doomed us all. Thanks to an accident on the M25 and a diversion through Essex, we arrived at Latitude SEVEN HOURS LATER. 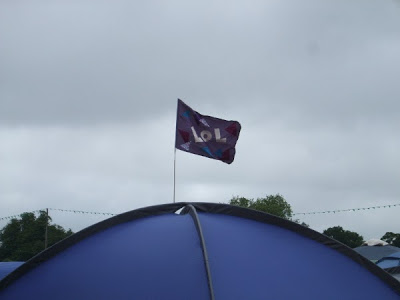 We hurried to put up our tent and put some sunscreen on, and made our way to the Literary Arena for the Festival of the Spoken Nerd, who we’d seen quite recently at one of their London shows. The jokes we’d heard before were still funny the second time around (especially a certain spreadsheet pun, which my boyfriend applauded again) and there were a couple of new bits. We stayed put for the Picador Literary Death Match: Love Edition, which was an entertaining blend of silly and serious. Four writers read from or talked about their work, four judges gave their opinions, and in the end a game of Play Your Cards Right decided the winner.

After that we went to bed, because SEVEN HOUR COACH RIDE.

We started the day at 7:30 because our tent was too hot to sleep in any longer. We drank orange juice, chewed cereal bars, read the programme for ideas and then walked to the Outdoor Theatre for And Remember…We Care: Dr Who and the Latitudes, which was basically three actors arguing about Doctor Who whilst playing different characters. If it sounds silly, that’s because it was. I especially enjoyed giggling at the conga line at the end during a song about Davros.

Then we wandered around for a bit and looked at all the pretty arty decorations in The Faraway Forest (one of the wooded areas), had lunch, sat in the Poetry Arena for a while (I’m not sure who was performing as the schedule was changed), and then went to the Cabaret Arena to see Austentatious, an hour-long improvised comedy loosely in the style of Jane Austen. I laughed so much I nearly cried. Twice. They perform at least once a month in London so it’ll be very tempting to go see them again! 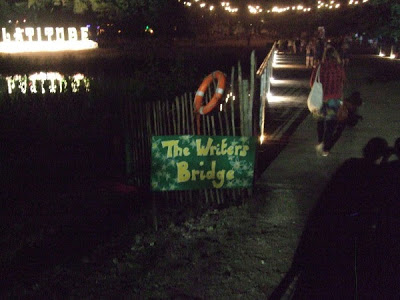 Then we headed back to the Poetry Arena to listen to some more poetry (what else were you expecting?) and await Carol Ann Duffy, who I was very excited about seeing because I studied The World’s Wife for A Level and still remember most of the poems! She was as excellent as expected and the tent got rather full.

Then we had dinner, went back to our tent to apply more sunscreen, and returned to the arena to see Bloc Party’s headline set at the Obelisk Arena, the mesmerising Dead Poets back in Poetry, and finally Pappy’s in the Literary Arena. At this point I was so tired that I fell asleep and missed about half of the show, so when it had finished, we went back to the tent.

On Saturday morning we decided that we’d done too much walking during the previous two days, as my feet now had two blisters each and my back hurt too. So we bundled sunscreen and extra layers of clothing into our bags and resolved not to go back to the tent until we wanted to sleep. This was an brilliant strategy, as it also meant we got to see more shows!

It was a colder morning, so we woke up later (though not late enough for my liking!), and only made it to the Comedy Arena in time to see Dylan Moran. It was a good show, despite the bursts of rain. After that we bought some more plasters for my feet, had lunch and wandered around a bit before deciding to go to the Literary Arena early for the British Library Presents: Propaganda talk, in the hope that we’d be able to grab one of the big cushions scattered near the front. When we got there, I lay down on the floor and promptly fell asleep. I did say I was tired, right? I did manage to wake up in time for the Propaganda talk, which took the form of a very entertaining and at times quite heated debate. There was nothing in it that I personally found world changing, but several of my friends have said that the Propaganda exhibition is well worth checking out so I must remember to do that before it closes! 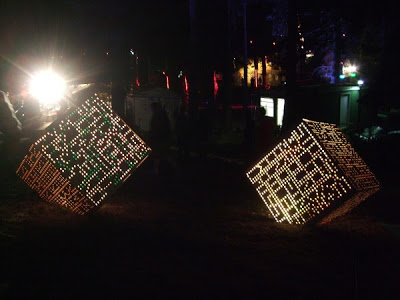 Then we had ten minutes to get over to the Obelisk for the Yeah Yeah Yeahs. I love the Yeah Yeah Yeahs anyway but they were definitely the musical highlight of the festival. Okay, I only saw four musical performances. But I overheard lots of people agreeing with me!

Then we had dinner and spent a lot of time trying to find the 3D glasses for Kraftwerk’s show. We grabbed two of the last few pairs, and it seemed like they didn’t have enough, but it was fine in the end as lots of people decided it wasn’t their thing about three tracks in and left. To be honest, Kraftwerk don’t make my kind of music, and the 3D show was underwhelming – there were a few neat tricks but overall it was too repetitive to hold my interest.

We ended the day with Robin Ince’s Dirty Book Club, a literary and comedy variety show. We did wish that Robin Ince did a bit more reading from his ‘dirty book’ collection, but despite this the cast managed to keep us entertained until it was time to go back to the tent and sleep.

I woke up and desperately wanted to go back to sleep, but a) it was too hot and b) we had lots to see! We had lunch and then went to the Literary Arena, where we caught the tail end of Grace Dugdale‘s talk. It wasn’t in the programme but was really interesting, and if we’d had any idea it was happening we would have arrived in time to listen to it from the start. It was followed by David Schneider‘s Is the Internet Making Us More Stupider?, a funny look at internet addiction. 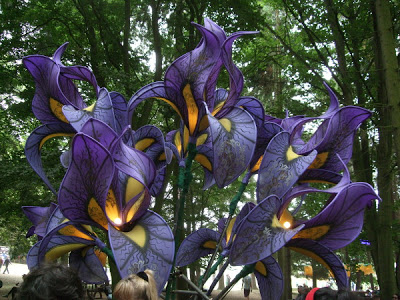 I took this photo in the lunch queue. Aren’t they lovely? I want them.

Then we rushed over to the Comedy Arena in the hope that if we got there an hour and a quarter before Eddie Izzard was due to be on, we might actually get to see his performance. We didn’t get inside but we did get to sit on the grass in front of the big screen that displayed each performance. Before Eddie Izzard we saw Katherine Ryan, who was really good, and Marcel Lucont, who was not quite as good (and difficult to hear sometimes) but still laugh-out-loud funny for much of his set. Finally, Eddie Izzard, possible future Mayor of London/MP came on and was pretty much universally adored by the crowd, especially when he mentioned his political ambitions at the end!

We had dinner and caught the end of The One Hour Plays, which was a bit confusing to start watching mid-way through but we enjoyed the word games. When they finished, we headed over to watch Foals, a band that we’d both heard of but hadn’t heard before. I probably would have enjoyed their set more if I’d known the songs, but I wasn’t overjoyed by their performance, and we left early to avoid getting swept up in the mass exodus at the end.

There wasn’t much left going at this point, so I flicked through the programme and took a gamble on the Cabaret Arena, where the two acts we saw were plagued with technical difficulties, especially Idiots of Ants, who didn’t really recover from the microphone issues at the start of their set. But the final act, Ben Target, was brilliant and surreal – we thought that maybe the problems with the music were just part of his show!

Finally, we wandered through the parts of the site that we hadn’t visited before, took some photos, and went back to the tent.

So would I go again?

Yes, depending on the line-up! I had so much fun, and although I looked forward to getting home and having a shower (there
are showers at Latitude, but we were too busy to use them!), I was really sad that it was all over.

I hope I’ve given you a good overview of the festival as well as tiny reviews of all the acts we liked. If there’s anything you’d like to know, please leave me a comment!