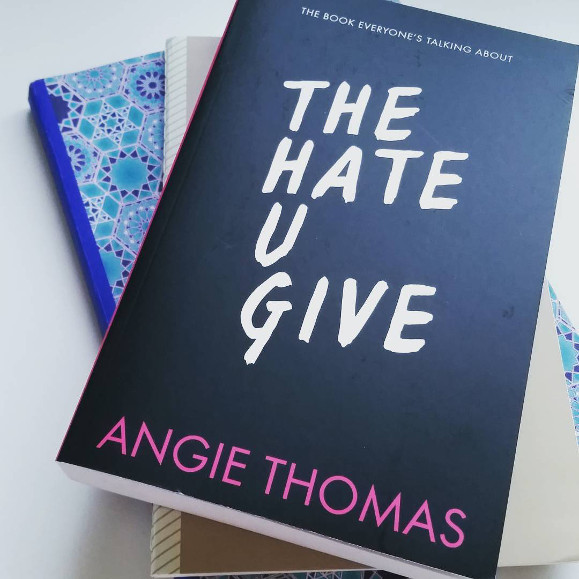 My proof copy of The Hate U Give has no tagline on the front cover other than ‘The Book Everyone Is Talking About’ – but it doesn’t need any more as I can barely remember the book world before everyone was tweeting and ‘gramming and otherwise talking about it!

The Hate U Give is a YA novel inspired by the Black Lives Matter movement in the US, about a girl named Starr who is the only witness when her best friend Khalil is shot and killed by a police officer. It is now out in the US and will be published in the UK in April by Walker Books. After hearing so much buzz about it, I couldn’t wait to read it, so I was delighted to get my hands on a proof. I finished it this weekend and I thought it was brilliant, so here are three reasons why I loved The Hate U Give:

The Hate U Give deals with how racism impacts lives at all levels. It’s not just a matter of life and death, but it also affects the opportunities people have or lack and how they interact and build relationships with other people. There is a lot to think about, but The Hate U Give makes it accessible by giving us Starr as the heroine, a teenage girl who doesn’t have everything figured out at the start of the book. As she learns and grows, the reader can too.

Starr doesn’t just have this one thing going on in her life. She also has a family whose dramas continue on as always, friendship problems, and a love life. She’s part of this whole community that is impacted by the shooting as well as by prejudice in general. I absolutely loved reading about Starr’s community, especially her family, and their history and group dynamic really brought the story to life. The characters are absolutely wonderful – interesting, charming, and three-dimensional. I hope that this book will help people who otherwise might have thought of these shootings as happening to Other People to empathise with what Starr goes through, and therefore to empathise with the millions of real people living through similar situations.

I think a lot of people would go into a book like this expecting it to be relentlessly hard-hitting and difficult and sad. But no! It is hard-hitting, of course, and I felt devastated and sad along with Starr, but these moments of intense emotion are balanced by utter hilarity. There’s this one scene towards the end which gets extremely tense but is also really funny. I read it at 2am on Saturday, and was laughing my arse off while also terrified for the characters, which I don’t think is a combination of emotions I’ve ever experienced before while reading a book.

It’s so strange to think that we’ve only been talking about this book for a matter of months and that soon it will be out everywhere – but that’s great, as I think it deserves to reach a massive audience.

I was sent a second proof so I am giving it away to one lucky reader. To enter, follow me on Twitter and retweet the tweet below. Full terms and conditions can be found here.

Follow & RT by 19/3 to enter to win this proof of The Hate U Give!
My review: https://t.co/qnqEmryxAk
Full T&Cs: https://t.co/l4HeENhcFR pic.twitter.com/O8AhXQghAE