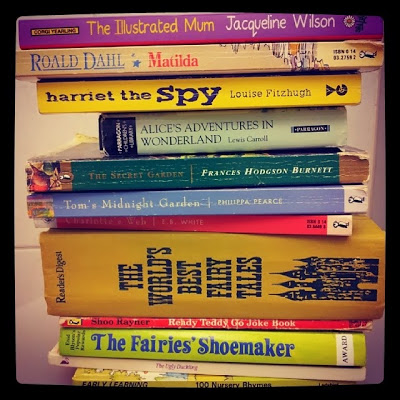 All the books featured in my last Bookish Brits video!

‘The Girl Myth in YA Fiction (And Beyond)‘ is a really interesting look at the way that reviewers judge girl characters as likeable or unlikeable and how this is informed by and impacts upon the way that girl characters are written, avoiding some stereotypes only to create others. I personally love reading about girls that cross the likeable/unlikeable binary – unlikeable girls who still try to do good things, or likeable girls who decide to make decisions that benefit themselves more than others, so I really enjoyed reading this post and seeing the recommendations.

I absolutely adored reading Michelle at Fluttering Butterflies‘ Top Ten Favourite Reading Memories post, so much so that I’ll be writing my own version in the next few weeks!

Daphne at Winged Reviews is celebrating her second blogoversary with a stupendous giveaway.

Anti-Bullying Blog Week has just begun at A Day Dreamer’s World – and Bookish Brits is beginning an Anti-Bullying themed fortnight! We’re also looking for a new vlogger to join the team – could it be you? (end lottery voice)

Becky of The Bookette attended a School Libraries as Learning Centres course in Portugal and wrote about the experience: Part One and Part Two. I’m not a librarian but as a lifelong library fan I enjoy thinking about the future of all kinds of libraries.

On that subject, Voices for the Library just published a great piece: Why Terry Deary has got it wrong on public libraries and e-readers (via @readingagency)

Emily of the Mira Ink blog reports from an event at Waterstone’s Piccadilly, and asks Is any subject taboo in YA literature? I have to agree that the answer is no – and that it is a good thing!

My favourite review this week was BookaUhu’s review of Geek Girl by Holly Smale – I’d heard a lot of good things about it but now it really must go on my Christmas list or up to the top of my library wishlist!

I’m sure you must have heard about the Authors for the Philippines auction by now – if you follow me on Twitter, I’ve been tweeting and retweeting on the subject several times a day! If you haven’t heard, all you need to know is that it’s a charity auction to benefit the victims of Typhoon Haiyan via the British Red Cross. There are a whopping 468 items currently listed!

All the items that I would bid on have soared out of my tiny aspiring-novelist’s budget, so I thought I would pretend I was a richer woman and engage in a bit of fantasy shopping…

My name isn’t really pop band material but I’d be seriously tempted to buy item 406, Your name as the name of a popular band in YA author Luisa Plaja’s next book, for my cousin who has just started secondary school. I don’t think she’s read any of Luisa’s books yet but wouldn’t it be awesome to discover your name in a book? If you don’t fancy making your name or someone else’s into a band name, you can choose a character name instead or have your name shouted by a badger.

Various agents are offering critiques, and it would be utterly amazing to have a critique from any one of them, but especially Karolina Sutton of Curtis Brown. Several other people must agree with me as the bidding is now up to £450!

Finally, I would be unable to resist the signed Veronica Rossi books, including an ARC of Into the Still Blue, or the advance proof of It Felt Like a Kiss, by Sarra Manning.

If your budget is bigger than mine, do take a look at the auction site – bidding is open on all these amazing items and many more until 8pm GMT on Wednesday 20th November 2013.

I hope you’re having a great Monday!