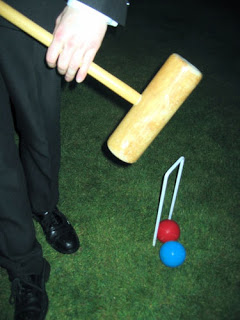 Photo by acme – I was really surprised that something actually came up when I typed ‘croquet night’ into Flickr’s Creative Commons search.

After middle-class miscreant Allie is arrested for the second time, her parents, fed up with her behaviour since her brother disappeared, decide to send her to boarding school. Her phone and laptop gone, Allie enters Cimmeria Academy determined to keep to her rebellious ways. But she is disarmed by the charming headmistress, Isabelle, and by the fact that everyone there knows her name, teachers and pupils alike. Despite the fact that the school is unlike anything she’s ever known, with pages of mysterious rules, servants to clear the plates away at dinner, and even balls, she settles in quickly. At Cimmeria she can forget her family, and focus on her new best friend, Jo, and the possibility of impending romance with the gorgeous Sylvain.

Well, that what she tries to do. That’s what everyone seems to want her to do, except moody Carter, who keeps asking her questions, making her wonder what she’s doing at a school where everyone else is legacy – the child of someone who went to Cimmeria. Nobody wants her going around trying to find out what’s going on at Night School, but when the summer ball ends in horror, she won’t stop.

It was inevitable that I enjoyed Night School enormously. It has a few elements that I find irresistibly charming – a boarding school, lots of gossip, and a heroine that wears Dr Martens. In fact, I’d forgotten how much I loved boarding school stories before I read Night School. It gave me the urge to find and read many more (suggestions appreciated in the comments!). I like contemporary teenage fiction best when the characters get to live lives that are a bit more glamourous and exciting than the lives of most actual teenagers are, so I loved the poshness of Cimmeria. Cimmeria Academy is now on my list of fictional schools I would happily have attended (under Hogwarts and Miss Cackle’s Academy, of course). The library sounds like heaven, plus, they provide you with beautiful dresses to wear to balls! Amazing! Plus I totally want to play night croquet, pass me a mallet! Is it called a mallet?

Night School really piles up the mysteries right from the start. What happened to Allie’s brother? What does the Night School actually do? I was hooked really quickly and constantly trying to guess what was going on. I loved the range of characters, from troubled Jo, to exasperating Carter. I liked that a few serious issues were thrown into the mix so that it wasn’t a book solely about a girl trying to solve the mysteries that surround her. It took me a while to warm to Allie completely as she seemed to be a bit of a blank slate at first, despite her rebelliousness, but ultimately, I thought she was a good protagonist, self-conscious but still fairly assured and needing to be responsible for her own safety.

There were a couple of things that bothered me. Firstly, Allie’s reaction to a certain incident that happens at the summer ball. Mostly the fact that she didn’t tell anyone about it. I can understand that other things that happened on the same night were a little bit distracting, but she didn’t even tell a friend, let alone a teacher. I also thought she put up with the perpetrator’s presence too easily afterward. If that happened to me I wouldn’t want the person near me. Secondly, although it is the first book in a series and its main purpose is to set up enough tension and possibility to sustain several more books, I would have liked an answer or two more than we were given!

These are fairly minor quibbles though. Overall, I thought that Night School was a gripping boarding-school adventure with just the right amount of glamour. It’s a fantastic start to the series, and I am looking forward to reading the next one! And to trying out night croquet at some point in my life, now this novel has given me the idea. It sounds like like Skins meets Made in Chelsea, in sport form.

Many thanks to Atom Books for sending me a review copy.