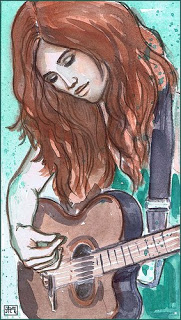 Molly Montgomery is being sued for 5 million pounds by her former record company, and she’s suing them back, despite not being even 20 years old yet. Her lawyer, confident they will win, asks her to write down the whole story of how she went from uncool teenager to front woman of The Hormones, so that he can build a case. This account makes up the bulk of this book.

It’s not the most original story – teenage fiction as a genre is filled with fantasies about ordinary teenagers who becomes celebrities – but it is unusually realistic. Molly forms the band with her best friends Jane and Tara, in the hope it would make them a little cooler, writing songs about Hello Kitty and magic markers, but it is soon hijacked by Dean and T, two boys who worm their way into the band by insulting them and promising that they could make the group sound better. Molly hates Dean at first but starts to fall for him as they are signed up by a record company and taken around the world to tour. But their manipulative manager doesn’t want them to date, and soon he starts to make other demands too, and things go from bad to worse as Molly’s virginity becomes hot gossip and Jane tries to live the rockstar stereotype.

, and Diary Of A Crush 2: Kiss And Make Up, and Fashionistas: Irina

. The plot of Guitar Girl was a bit predictable compared to the other stories, and I don’t think Dean makes an alluring enough romantic interest. What can I say? He’s not Dylan, and I’ll always love Dylan the best, although Noel from the Ruby Oliver series is giving him a run for his money these days. Dylan is all mixed up with nostalgia as I read the Diary of a Crush series in J-17 as an actual teenager, and was thereby hooked on art boys for life. But I think even if I was fourteen right now Dylan would beat Dean in the Sarra Manning Toxic Boy Showdown, although the contest is kind of rigged as Dylan gets three books and is essentially nicer.

Anyway, back to Guitar Girl. I thought it was more down-to-earth, with more details about the music business, than any other book about teenagers becoming pop stars that I have read. The characterisation is strong, although I wanted to know more about the histories of the various members of the band than the book includes, and Molly makes a believable teenage narrator. I loved the fast pace and thought that it captured the feeling of being a teenager really well. Despite my criticisms, I have read and enjoyed Guitar Girl more than once.

If you read and enjoy this book, you will also want to check out two of Sarra’s other books – Let’s Get Lost

from the Fashionistas series, because they feature appearances from characters in Guitar Girl, and you can see what happened next…

Here’s my review of Pretty Things, also by Sarra Manning.